Years ago, I gave each of our grandchildren treasure boxes. The first one was given to our oldest grandchild, Ansley, to keep letters I had written to her. The first letter was written soon after she was born, recording the anticipation of her birth, family, and friends who were present when she was born and other details. In addition, I wrote things that the Lord put in my heart for her to read later. Letters were written for each birthday for several years until three sisters were born. I kept each one from the time they were three months old until they began kindergarten and during the summer months two days a week while Lee worked as a physical therapist. I did not have time afterward to write letters to the other grandchildren, but they all have the treasure boxes for storing things we studied together.

In them are workbooks that we used for our Summer of Psalms used for studying God’s Word over a fourteen-year period, plus awards they received for memory work, a CD of the music we sang, and crafts we used for activities. (To our one grandson we gave a solid red box.) In the last two years, we have given them copies of some of our published books. We no longer study together, but they have these treasures to review and remember what they learned when they were younger; hopefully to share with their own children and grandchildren. Our books may be of more interest to them when they are older. Our youngest, Emma, will be sixteen in March. 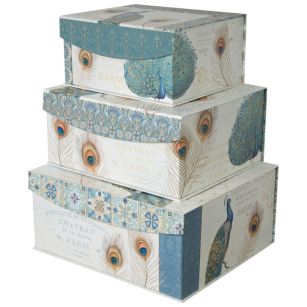 These boxes serve as a place for them to keep the sources from which they have learned of God and of heaven ~ those eternal things that never fade or pass away. And should they forget and wander from the paths of their childhood, they can return and rediscover the truths of life that point them in the right way, along with the study Bibles we gave them.

“A new heart also will I give you, and a new spirit will I put within you: and I will take away the stony heart out of your flesh, and I will give you an heart of flesh.” Ezekiel 36:26

I believe the idea for the boxes was a gift from God our heavenly Father and a replica of the new heart He gives us as His children. He has designed them as a place for His love, joy, and peace, His truth, wisdom, knowledge, and grace; for His songs and memories of growing up in Christ. Since the new heart belongs wholly to Him, He has the freedom to add whatever and whenever He wants. Unlike the earthly boxes I gave my grandchildren, He has the key to each of His. He opens and closes, reveals and adds His own heavenly treasures according to His heart and will.

“But we have this treasure in earthen vessels, that the excellency of the power may be of God, and not of us.”
2 Corinthians 4:7

There have been times I wished I had had these treasures for my children, but I did not have the new heart to receive these blessings when they were young. Our heavenly Father has no grandchildren but gives His treasures to those He desired and sired for His own.

“Beloved, now are we the sons of God, and it doth not yet appear what we shall be: but we know that, when he shall appear, we shall be like him; for we shall see him as he is.” 1 John 1:2

Gracious Father, how blessed we are that you call us your own; that we belong to you both by Creation and Redemption. Continue to reveal your grace and glory, fill us continually with your Holy Spirit of truth, wisdom, and knowledge, as you are preparing us to live with you forever. In Jesus’ name, I pray. Amen.
Fran