Thirty years ago I was drawn to God’s Word to discover things I had never heard. Through adversity, God began to show me great and mighty things I had never known (Jer. 33:3). After searching different religions, including psychology, I came back to the roots of a poor, meager Christian faith that was never stoked and fed.

We live in a world that brings us to see our need for something beyond our understanding. It stirs up a fire that cries for help. If we come to His Word, God uses it in our adversity to burn away the dross of ourselves. Our anguish either turns us to seek the truth or it destroys us and others in the process. When we turn to Him, He uses our helplessness for His glory and our good.

Through years of study and prayer over God’s Word, I begian my life as a writer by formatting for chosen groups what I was learning. This happened to be for middle school students in our church and for youth discipleship groups.

In August 1992, what I was writing from head knowledge, became a fire of truth in my very soul. I know what Jesus meant when He said, “You must be born of the Spirit.” Some may say that the ember of faith was rekindled. Perhaps. It does not matter whether from an old faith that was put aside or from a totally new spark from God’s Word and His Spirit, there was a welling up of TRUTH within me that lighted a fire and new life that would feed on His Word and bear fruit to this day. I vividly remember my first writing of TRUTH. It was more than my thoughts could contain.

The whole gist of those years was “TRUTH cannot be contained.” Yet, it seemed then as if buried for many generations. I left those notes to continue in my search for TRUTH believing that it could not stay buried but one day would have to explode. You cannot bury TRUTH, just as you can’t bury LIFE.

The enemy has succeeded in hiding TRUTH from God’s creatures for thousands of years, but the power of God in His TRUTH is beginning to accumulate among His people. Those who continue in His Word know the TRUTH and are being set free.

The world has its volcanoes – the nation of America being one of the most volatile. It seems the emotions of human nature are overflowing with the lava of hell itself.

The Unseen
The world can only see what men are doing to themselves.  They cannot see what God has planned and is doing at this very moment.

I write this post today as I am led to stir this fire of TRUTH in the hearts of His people who read this.

We as individuals have little power over “the powers that be.” Recent news uncovers things happening in this world that are beyond my imagination – things not worth repeating.

Repetition of the promises of our heavenly Father overpower the words of the enemy.

“He who is in you is greater than he who is in the world” – that lies in wickedness.”

God’s kingdom rules in the middle of the turmoil. In and through what we are seeing of man’s exploits and deviations is the working of His power stirring up His church. I know this because my church and I am part of this volcanic explosion of TRUTH.

Deuteronomy 29:29 was one of the truths I discovered in those first years of new life.

“The secrets belong to God but are revealed to us and our children.”

They are revealed as we continue in His Word – “you are truly my disciples”—children of God—1 John 3:1-3.  “And you shall know the truth, and the truth shall make you free.” John 8:32

Free from what and free for what?

We are freed from deception and death. We are free to LIVE in light of TRUTH.  TRUTH works the power of God in His people.

So, let us believe beyond what we can ask or think, of His kingdom in the lowest part of this volcanic action happening in our nation bursting through in an explosion of JOY to His glory.

“These things I have spoken to you, that My joy may remain in you, and that your joy may be full.

Lord willing, I will share how our heavenly Father is working in His church today.

In the meantime, I would share with you the link to our pastor’s present series on Philippians in our morning worship and Raising Godly Children in the evening. You would be blessed to see what the Lord is doing in our midst for humility, unity, and joy to His glory.

Please begin to pray this prayer for His church with us. He is beginning a great and mighty work.

That we may be “FILLED with the knowledge of His will in all wisdom and spiritual understanding; that we may walk worthy of the Lord, fully pleasing Him, being fruitful in every good work and increasing in the knowledge of God; strengthened with all might, according to His glorious power, for all patience and longsuffering with JOY;” Colossians 1:9-11

Gracious Father in heaven, hallowed be your name, your kingdom come, your will be done in earth as it is in heaven. You have set your throne in the heavens and your kingdom rules over all. From the rising of the sun to its setting, we praise you. Stir up your Spirit within the hearts of your people, gather us before your throne to praise you. Let our fervent prayers to your throne of mercy bring lightnings, thundering, and earthquakes to this earth, the power of your TRUTH and LIFE in us through Jesus our Lord surge and bring forth your JOY through us to your glory. Let the world know who you are in us. In His name, I pray. Amen.
Fran

“I have manifested Your name to the men
whom You have given Me out of the world.
They were Yours; You gave them to Me,
and they have kept Your word.
John 17:6

Continuing our study on The Excavation of John 17, Jesus spoke in His prayer to the Father in John 17:6 using a term translated into English as “manifested.” Some translations use the word “revealed.” This is from the Greek root word phaneroo, which means “to make something visible, recognizable, explained, or to declare.”

Just as the term used in chapter 1, logos implies a message or speech, this verse indicates that Jesus represented God the Father in His ministry to the disciples. Acting “in the name of” someone means to reveal their will and their authority (John 12:13; 14:26; 15:21; 16:26). (Bible Ref.) 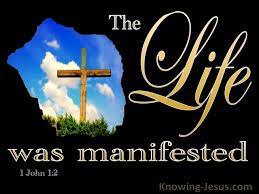 Jesus was revealing the Father (His name, His being, His authority, His power), Jesus, Himself, being the “image of the invisible God.” (Col. 1:15)

“who being the brightness of His glory and the express image of His person, and upholding all things by the word of His power,” (Hebrews 1:3)

He revealed the Father’s name to “the men He had given Him out of the world.” We recall the parables Jesus spoke to the crowds but interpreted only to His disciples.

The scribes and Pharisees were blind and could not see what Jesus was revealing to those whom the Father had chosen as his own.

Only to those who were predestined before the foundation of the world (Eph. 1:4: 2 Tim. 1:9), were the Father’s and given to Jesus.

They had “kept His Word.” They had believed and followed as He taught them for three years. In verse 12, He says He kept them “in His name.”

From the start of our study of John 17, we learn that Jesus reveals His Father (and our Father) as a giver and the work He sent Jesus to do reveals Him as a forgiver.

Jesus was given authority over all flesh. (vs. 2) His atonement was His means of giving eternal life to those the Father had given Him.

He finishes the work the Father had given Him to do. (vs. 4)

The Father gave those who were His to Jesus for their atonement and His keeping. (6, 12)

They knew all things which the Father had given Him were from the Father. (7

He prayed that those the Father gave Him would be with Him in His glory. (24)

He prays, “Holy Father, keep through your name those whom you have given me.” (11)

In His prayer to the Father, He reveals vividly His role as our Mediator.

In Him, the Father merged the creature who needed redemption with His name, His Words of truth, reconciliation, and His glory.

We will see in further study more of the work of Christ’s atonement between us and the Father.

“I will worship toward Your holy temple,
And praise Your name For Your lovingkindness and Your truth;
For You have magnified Your word above all Your name.
Psalm 138:2

Gracious Father, thank you for revealing your name and your Word to us through Christ, your living Word. His prayer to you is a blessing for us to know who you are and why you sent your Son. Reveal your glory to us as we read and meditate more on your Word. In Jesus’ name I pray. Amen.
Fran