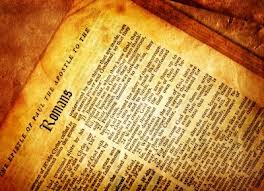 to be saints”  ~  “called of Jesus Christ.”  Only those would read the letter would know his purpose.  Only those who were “loved of God” would understand his words.

In the first chapter: Paul, from God’s work in him, has received “grace and apostleship for obedience of faith.”

In the last chapter: “Now to him who is able to strengthen you according to my gospel and the preaching of Jesus Christ,… according to the command of the eternal God, to bring about the obedience of faith—to the only wise God be glory forevermore through Jesus Christ! Amen  (Romans 16:25-27)

Without anything else these two quotes are a front and back cover, encasing the gospel of our Lord Jesus Christ ~ its purpose; its work; its glory to God alone.

Martin Luther, a forerunner of the Reformation and a discoverer of the hidden truth of a relationship with God being in “righteousness by faith alone” did not come to his understanding on his own volition, but as Paul, by the “effectual working of His power.”

What does righteousness have to do with faith?  Righteousness, a word ending with the suffix “ness” indicates a condition, or state of being.  No man, since Adam, exists in this state, but, in God’s sight, all exist in a state of “sin and death” ~  “there is none righteous.”  Existing is not the same as living.  All men are  “dead in sin and trespasses” before God, except for the atoning work of Jesus Christ.

This state of righteousness is a condition based on God’s own righteousness as revealed in His Son, Jesus Christ.  We fell from this state, with Adam; but are restored to this state in Jesus Christ.  This new condition that we share with Him is a state of being “righteous.”  And if we share this state with Him we are “right” before God and will do what is “right.” (Hebrews 13:21)  When Jesus said that we must first “seek His kingdom and His righteousness” He did not mean that this would be a natural seeking on our part, but the result of His working in our hearts and lives.

Psalm 1 is as clear as Paul’s writing.  Those who are “blessed” to be called by the Holy Spirit, through the gospel of our Lord Jesus Christ, will experience the love of God’s law and meditate on it day and night; bearing fruit in its season, and prospering in Him.

Obedience of faith is the response and outworking of His own power in the heart and life of the believer. By His own grace He brings us to faith.  It is not a cheap grace, nor a cheap faith ~ one that we conjure up on our own.  It is a powerful faith that draws us to Christ (John 6:44-45) and keeps us always seeking Him.  Faith is the root of the seed of God’s word; obedience is the fruit.

Read Paul’s letter to the Romans with this understanding, and the desire for such a faith that works obedience to the heavenly Father that created us and redeemed us.  And as Paul “beseeches” the believers in Rome ~ by the same “mercies of God” that has saved us ~ we present our bodies a living sacrifice, holy and acceptable to God  ~  the only reasonable response.  This holy desire for Him to work all that He desires in us is the nature of righteousness and obedience.

Not being “conformed to this world,” but being “transformed by the renewing of our minds” is the desire of all who have found their righteousness in Christ alone, and will prove in us what is the will of God in all that is “good, acceptable and perfect.”  (Romans 12:1-2)

In the middle of Paul’s letter we see the overall purpose of God for us, as believers ~
to be conformed to the image of His Son.  (Romans 8:29) Only He can create; only He can transform what He has created, and make us what He wants us to be.  Let us, with a voracious desire, seek to be all that He has redeemed us to be.  He will by the authority of His Word, and the power of His Spirit make us all that He wants us to be ~ obedient children of faith.

Dear heavenly Father,  attend to the hearts of your children today.  Bring us on your wings of love close to you. Nestle our hearts unto your precious word, that they never be separated from one another.  Show us your ways, teach us your paths, lead us in your truth and teach us; for Thou art the God of our salvation.  On Thee do we wait all the day.  In Jesus name we pray.  Amen