If we are to get Beyond a Mere Christianity we must know the language. In 2016, an article titled Three Obstacles to Spiritual Growth listed Words as the main obstacle, followed by Feelings and Influences. I did not realize, until I reviewed that article, that we mentioned the three words we write about here.

I will begin by saying that the majority of those who are professing believers in Christ are not familiar with or use these three words; yet they are significant in what we believe and how we live. Are these words used in normal conversation? No, but, it is necessary for a Christian to know and understand them. We cannot just say, “I love Jesus.” These powerful words give true meaning as to why and how we love Him. If understanding these three words is too much for one reading, you may want to save the article in your files and come back to it as you have time.

Propitiation, justification and sanctification originate with the Father, the Son and The Holy Spirit. Since these are not man’s words but God’s Words, we need to review them often and meditate on them with the Biblical references. I write this article with the same need as others through every generation to understand:
1. what God planned for His people,
2. how he established His plan through His Son
3. how He executes His plan by the power of His Holy Spirit

All three words end in the suffix “ation” meaning “action or process.”

It is used in 1 John 4 and in Romans 5, both times of Christ’s atoning blood that appeases God’s wrath, on all confessed sin.
By the sacrifice of Himself, Jesus Christ provided the ultimate hilasmós (“propitiation”). (biblehub.com)

Before the foundation of the world, in planning a kingdom and a family for Himself, God our heavenly Father made a covenant of redemption with His Son, Jesus Christ (2 Timothy 1:9). This covenant would provide the work and conditions of His grace, whereby He would reveal His love for His people and by His Holy Spirit, draw them to Himself. Just as His work of Creation, the action and the process of Redemption would be His and His alone.

Why and how does a Christian love Jesus?

“Herein is love, not that we loved God, but that he loved us, and sent his Son to be the propitiation for our sins.” 1 John 4:10

God shows us His love in all generations through the sacrifice of His Son for us 2000 years ago. He planned to give up His own Son to appease His wrath against us. (Who can understand this love?) He gave His Son to give us life, so that we would live eternally with Him. Someone’s blood has to appease His anger against sin. It will be His or ours. Someone has to pay ~ either us or His Son.  He was the perfect “Lamb that was slain.” Only God could provide such a sacrifice for us.

I remember the word “propitiation” by syllables. The prefix “pro” indicates a professional who is able to perform. The center of the word is “pit” where Jesus finds us. “I” am between the “pit” and “ation” whereby His is the action and process of bringing me out of the “pit.” O, what love that gives all that He is and has. He could give all for us through His death; through His resurrection and ascension He would gain His own life again and give life to all who are drawn to Him in faith and repentance.

There is a connection between PROPITIATION and JUSTIFICATION through the righteousness of Jesus.  Romans 3:24-26 incorporates “propitiation” and “justification” through the sinless life of Jesus Christ that qualifies Him for propitiation that leads to our justification.

”Being justified freely by his grace through the redemption that is in Christ Jesus:
Whom God hath set forth to be a propitiation through faith in his blood, to declare his righteousness for the remission of sins that are past, through the forbearance of God;
To declare, I say, at this time his righteousness: that he might be just, and the justifier of him which believeth in Jesus.”

JUSTIFICATION G1347
Dikaíōsis(dik-ah’-yo-sis) fromG1344 aquittal (for Christ’s sake
The act of God declaring men free from guilt and acceptable to him.

Whereas God planned for the blood of Christ to appease His anger for our sins, He planned through Christ to justify His own actions in pronouncing us “Not guilty” for our sins. It is a forensic term as if applied in a court of law.

Notice in the following references the terms “offences” “judgment” and “condemnation.”

“Who was delivered for our offences and was raised again for our justification.”Romans 4:25

“And not as it was by one that sinned, so is the gift: for the judgment was by one to condemnation, but the free gift is of many offences unto justification.”Romans 5:16

“Justification is the judicial act of God, by which he pardons all the sins of those who believe in Christ. It proceeds on the imputing or crediting to the believer by God himself of the perfect righteousness, active and passive, of his Representative and Surety, Jesus Christ ( Romans 10:3-9 ). Justification is not the forgiveness of a man without righteousness, but a declaration that he possesses a righteousness which perfectly and for ever satisfies the law, namely, Christ’s righteousness ( 2 Corinthians 5:21 ;  Romans 4:6-8 ).” Bible Study Tools

“The act of faith which thus secures our justification secures also at the same time our sanctification (q.v.); and thus the doctrine of justification by faith does not lead to licentiousness ( Romans 6:2-7 ). Good works, while not the ground, are the certain consequence of justification ( 6:14 ;  7:6 ).” Bible Study Tools

SANTIFICATION
Sanctification is not a word found in the Old Testament, but references are made to the things God sanctified, things that were set apart, consecrated as holy for Him; the seventh day, places of worship, priests, etc.
New Testament G37
hagiozo; to make holy, consecrate, to regard as special (sacred) sanctify.

The word carries somewhat of a different meaning in the New Testament as it refers to a personal ongoing action or process on His part for His people. While propitiation and justification are one-time actions and already accomplished for all His people, sanctification is an ongoing action and process in making us holy; to live a consecrated life to Him as He is preparing us for eternity with Him.

As stated earlier: To show His love for us, God, the Father, planned, and in His timing sent His Son to be a propitiation for our sins. Jesus fulfilled the covenant of redemption (the covenant of grace) living a perfect life in obedience to the will of the Father. He was offered as a sacrifice for us, appeasing God’s wrath against us; was buried, and resurrected, securing our justification.That being finished, He ascended to the right hand of the Father as our High Priest to intercede for us. He sent the Holy Spirit to continue His work of sanctification in each generation until Christ comes again.

Let’s follow the process from Christ’s work on the cross to the supernatural work of the Holy Spirit in our hearts and lives.

“Christ also loved the church, and gave himself for it;
That he might sanctify and cleanse it with the washing of water by the word,
That he might present it to himself a glorious church, not having spot, or wrinkle, or any such thing; but that it should be holy and without blemish.” Ephesians 5:25-27

“But of him are ye in Christ Jesus, who of God is made unto us wisdom, and righteousness, and sanctification, and redemption.1 Corinthians 1:30

Paul explains sancitifcation of the Spirit in 2 Thessalonians 2:13

“God hath from the beginning chosen you to salvation through sanctification of the Spirit and belief of the truth:”

“Elect according to the foreknowledge of God the Father, through sanctification of the Spirit, unto obedience and sprinkling of the blood of Jesus Christ:

Propitiation leads to justification, and justification through the power of His Spirit in our sanctification brings us in obedience to Christ, the perfect plan of salvation before the foundation of the world (Ephesians 1:3; 2 Timothy 1:9).

Gracious and holy Father in heaven, how can we understand such a holy love and the power of your love, except as you send your Holy Spirit to do this great and mighty work in us. We praise you for your plans and ask that you continue working in our hearts and lives all that you desire for us ~ all to your glory and our joy. In Jesus’ name we thank you and praise you. Amen.
Fran

Related Article: What are Justification and Sanctification?

(Our daughter and her family will be coming for our Thanksgiving meal today, so there is not much time for writing, but I wanted to share these thoughts.)

When we think of our family feasts, are they just traditional ~ spending time with our family, eating and drinking to satisfy our human desires ~ or do we gather for a purpose beyond the physical?  Do we, as God’s people, understand the meaning of thanksgiving and feasting from a spiritual and eternal viewpoint?

During Jesus’ time, one of the feasts of the Jewish people was set for families to celebrate Passover in Jerusalem. They gathered as God’s people to remember the end of their bondage in Egypt. The Passover lamb was sacrificed and offered as atonement for their sins. Even as a lamb’s blood was slain in Egypt and painted on the doorpost of the houses of those who belonged to Him, the same sacrifice was being performed in Jerusalem year after year.

Going Up To Jerusalem

As Jesus spent three years with His disciples, He continually spoke of their “going up to Jerusalem.” He also said on different occasions that His “hour had not yet come.”

The last Passover celebration for Jesus, when His hour had come, He went up to Jerusalem. He instructed His disciples to prepare the evening meal, and then during their meal together He established the Lord’s Supper, a meal that would be for us a means to celebrate with Him as our once, and for all time atonement and the end of our bondage to sin.

From this dinner, He went to the Garden of Gethsemane where He prepared Himself to become the sacrificial Lamb. While the world was sleeping He was basting in prayer and tears. Then in the secret chambers of the enemy, He met “the power of darkness” and willingly submitted to be offered up as our sacrifice.

Jesus was crucified, and on the post of the cross the Father saw the blood of the Lamb. We look, in faith, to the blood of the Lamb of God, sacrificed for our sins, high and lifted up. We look to Him, partake of His sacrifice, and live, free from the power of the enemy and sin, now and for eternity. 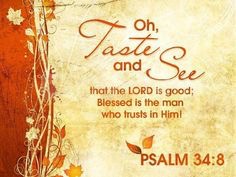 Is there anything for which we should be thankful, anything that would supersede our feasting on the Lamb that was offered for us.

Dear Father, such gratitude is beyond our offering, for such a sacrifice that is beyond our understanding. Work in the hearts of your people that we may taste, see, and experience the life of freedom and joy that is ours in Christ, your Son. Work your Spirit in our spirits to set forth praise and thanksgiving to you, to our Lord Jesus Christ and to your Holy Spirit for the work of our salvation. Keep us always rejoicing in you, with a daily celebration of praise and living to your glory. In Jesus’ name we pray. Amen.