Yesterday, Jerry was sitting on the screened back porch, listening to Rush Limbaugh’s comments about the Presidential Inauguration. I sat with him a few minutes. Mr. Limbaugh stated that there is a bureaucracy that operates in Washington. Seemingly there are those who hold no public office that control everything. We imagine that the wealthy and influential meet in secret chambers to plan their schemes.

We remember that Haman, in the Book of Esther, unknowingly planned his own hanging.

There is the record of God’s council spoken in Acts 4:24-32. The same council that instigated Jesus’ death brought in Peter and John to stop them from speaking of the salvation that God had worked through their scheme (Acts 24:28). After reporting what was said to them, God’s people prayed, and “the place was shaken;” they were “filled with the Holy Ghost” and “spoke the Word of God with boldness.”

Lightnings, Thunderings, and An Earthquake

And there is the reference in Revelation 8:4-5 of the prayers of the saints.

“And the smoke of the incense, which came with the prayers of the saints, ascended up before God out of the angel’s hand.
And the angel took the censer, and filled it with fire of the altar, and cast it into the earth: and there were voices, and thunderings, and lightnings, and an earthquake.” 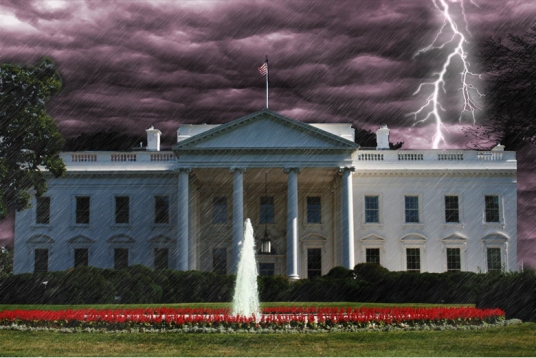 There are two councils here on earth. From the Fall of man, the antithesis has been ongoing. God continues to rule under His covenant of grace, by His own Word and truth. Men, under the power of Satan, rule the other council, according to their plans. But, even this one has always been under God’s sovereign control.

“The Lord has prepared his throne in the heavens;
and his kingdom rules over all.”
Psalm 103:19

He calls us, as His saints, to meet in His secret chambers to offer up prayers so that His council may be made known here on earth (Ephesians 6:18). Places can be shaken, lightnings and thunderings can wake even the most powerful in our nation and the world. We must pray, expecting great things, even an earthquake ~ for our salvation and His glory.

Gracious Father, you have taught us to know you and your Almighty power over all things. We believe that you are able to do exceeding abundantly above all that we ask or think, according to the power that works in us. Unto you be glory in the church by Christ Jesus throughout all ages, world without end. In Jesus’ name, whom you have given all authority and power, we pray, we thank you and praise you. Amen.
Image