Still, in the wonderful process of searching the truths of God’s Word for Filled with Grace and Wrapped in Glory, I am finding more to do with the Lord’s work around us than within us ~ at least a hundred references.~ much of which we are probably not aware.

It is the gleaning of His Word and His promises that bring us to understand His total and complete work on our behalf while we live in this wilderness. His Word reveals His constant presence with us but because we are so inundated by the thoughts, words, and behavior of the multitudes, we have not known and practiced these precious truths of the kingdom.

I had not understood why the term Wrapped in Glory was given in this title. Now, I am delighting in what He is showing me. The first pertains to being Wrapped. (We will share thoughts on His Glory later.) There are three references in the New Testament to Jesus’ being wrapped.

Jesus came from His glory into this world, was wrapped in human garb so that He could wrap us in the swaddling clothes of His glory.

How low the King of glory stoops, and how gloriously he uplifts the lowly to share his glory! Charles Spurgeon

Jesus was wrapped twice in His human helplessness ~ first, as a baby and last, as the sacrificial Lamb.

They were lying there in their regular folds as if the body of Jesus had simply evaporated out of them. Matthew Henry

Plainly the effect of thought, care, and composure; and clearly showed, that the body was not taken away in a hurry, or by thieves, since everything lay in such order and decency; and which was done, either by our Lord himself, or by the angels. John Gill

His resurrection reveals His finished 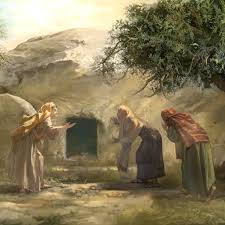 work. The last of His earthly wrappings set aside, He would prove His resurrection to His disciples, then ascend to be robed in His heavenly glory.

From the right hand of His Father, He sent His Holy Spirit, as He promised to His disciples before His death (John 14 -16; Acts 1) The Holy Spirit is now revealing and fulfilling all the promises for His people. Even as we are now learning what it means that we are made to sit in heavenly places in Christ, He will finish His work in and through us, in preparation to bring us home to the glory of the Father and our Lord Jesus Christ.

“Therefore if any man be in Christ,
he is a new creature: old things are passed away;
behold, all things are become new.”
2 Corinthians 5:17

Gracious Father, how are we to understand these things, except you give us your Holy Spirit to work them in us ~ to bring us by your power into the arms of our Lord and wrap us in your glory. Thank you for the promises that are ours in Christ as revealed in your Word. In Jesus’ name, I praise you. Amen.