To get to the depth of this twenty-first chapter (one more remaining) has been a tedious task. Even as I came to this, it seemed as facing one of those brick walls we run into close to the end of a project. There is something we can’t get over, around, under, or through, on our own.

I have described this overwhelming sense in other posts as finding more than I know how to handle. It is what I imagine winning the lottery would be like, only this is a spiritual windfall every time the Lord brings me to a new chapter in my life or to finishing a book.

Proving truth by our experience seems the easiest to write but much of the time, it is His working in us what we have not yet known. It is to find the joy of His presence, as He continues to teach and prepare us for eternity with Him. The Christian life is lived in the presence and power of the Lord God Almighty who brings us to imagine what is beyond where we are.

It is a life of growth that takes us from striving to surviving and finally, thriving in the middle of the common adversities that assail all human beings. As Christians, we face the controversies that exist between believers and unbelievers as well as among God’s people.

If we have been through the first twenty chapters of this book, we know that Christianity is not a two-bit religion or one by which we hitch our wagon to a star and hope it will carry us to heaven. It is not like any other religion but one that most people seem to be happy without.

Since the beginning, when God created a man and woman, there has been an antithesis ~ Satan and his angels gathering those who are captive to him to battle against God and His plan for His creation.

The Christian life is not an easy endeavor. The more we claim the promise of eternal life in Him, the more we are ridiculed and persecuted.

As the apostle Paul expressed the life of Jesus’ disciples, “We are accounted as sheep for the slaughter.” Jesus said, “If any man will come after me, let him deny himself, and take up his cross daily,” Luke 9:23

Although I have not come to the point of thriving as I desire, Jerry and I have survived ~ experiencing joy and praise through much hardship. The vision is put before us when we study the life of Christ our Lord and the apostles who were chosen to continue His ministry of proclaiming the kingdom of God.

If we never catch sight of the victory Jesus gained for us in this world, then we believe in vain.

It is a victory of faith to overcome as He rules in every area of our lives, whether personal or relational. We need His presence and power to overcome that which makes us captive to this world.

He bought us and brought us from being an enemy, to serve Him as a soldier of the cross. He gives us every weapon in His arsenal to overcome the enemies that strive against Him and His kingdom here on earth (2 Corinthians 10:4-5).

To get beyond striving to surviving in this world, we begin by knowing who and where we are. In John’s first letter, he describes the difference in God’s people and the world that “lies in wickedness.”

“We know that we are of God, and the whole world lies under the sway of the wicked one.” NKJV

“We know that we are from God, and the whole worldlies in the power of the evil one.” ESV

“We know that we are children of God, and that the whole world is under the control of the evil one.” NIV

In this one verse, we see the opposing forces that have made up the antithesis since the world began.

KJV and NKJV agree that “we are of God.”

ESV states “we are from God.”

NIV says “we are children of God.”

These teach us that as disciples of Christ we belong to God, which makes us different from the world.

In the next part of this sentence, John describes those who are not children of God. Every translation describes the territory of unbelievers as “the whole world.”

NKJV says “the whole world lies under the sway of the wicked one.

ESV says, “the whole world lies in the power of the evil one.

NIV says, “the whole world is under the control of the evil one.”

2 Corinthians 4:4 describes the evil one as “the god of this world.”

Ephesians 2:2 describes him as “the prince of the power of the air.”

“In this the children of God are manifest, and the children of the devil: whosoever doeth not righteousness is not of God, neither he that loveth not his brother.” 1 John 3:10

“Blessed is the man that walketh not in the counsel of the ungodly, nor standeth in the way of sinners, nor sitteth  in the seat of the scornful.
But his delight is in the law of the Lord; and in his law doth he meditate day and night.
For the Lord knoweth the way of the righteous: but the way of the ungodly shall perish. Psalm 1:1-2, 6

“And Pharaoh sent, and called for Moses and Aaron, and said unto them, I have sinned this time: the Lord is righteous, and I and my people are wicked.” Exodus 9:27

Satan’s Territory
During wartimes, we hear of servicemen taken captive as prisoners of war. Everyone since Adam and Eve, are born slaves into Satan’s territory. As the god of this world, he rules with power over the whole world.

A mere Christianity is not enough to survive the spiritual battles that come just by living here. A little faith will not stand against the onslaught of the enemy. Those who do not know Christ are destined to a final eternity with Satan and his angels.

Only Jesus Christ can save us from the enemy ~ the spirit of this world and his oppression.

“Who gave himself for our sins,
that he might deliver us from this present evil world,
according to the will of God and our Father:”
Galatians 1:4

Christ’s disciples are born again spiritually to belong to Him ~ predestined to eternity with Him.  It is Jesus Christ who delivers us from the power of the evil one.

“We know that whosoever is born of God sinneth not; but he that is begotten of God keepeth himself, and that wicked one toucheth him not.” 1 John 5:18 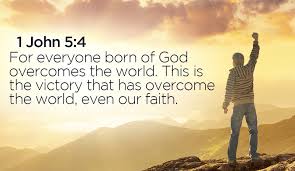 “Ye are of God, little children, and have overcome them: because greater is he that is in you, than he that is in the world.” 1 John 4:4

Titus 2:12 speaks of how God’s children are to live in this present world;

“And that ye put on the new man, which after God is created in righteousness and true holiness.” Ephesians 4:24

The Power of the Holy Spirit
The Lord promises His people the power of His Holy Spirit ~ the same power that was with Him on earth. The same Holy Spirit by which Jesus was conceived of the virgin Mary is the same Spirit by which Christ is born in us ~ the same power to overcome sin and make us holy. The same presence with Jesus as He endured the suffering and death of the cross is the same presence of the Spirit of Christ within us ~ to live sacrificially for Him (Romans 12:1-2)..

It is the same power that raised Him from the dead and made Him to sit in heavenly places to rule at the right hand of the Father (Ephesians 1:19-21; Ephesians 2:5).

It is the same power given to those in persecution: “Who through faith subdued kingdoms, wrought righteousness, obtained promises, stopped the mouths of lions. Hebrews 11:33

We are chosen and born into the kingdom of God, and called for battle against the god of this world. The purpose as children of God is not to take over the world. The Father’s plan is for a new heaven and a new earth. We are to be light, holding forth the word of life to those that are in our paths. We are to provide the good news of Christ so that all who will believe the gospel of Christ will be joined to His family.

We are His Church, living in the wilderness provided for our first parents when they had to leave the Garden of Eden. Their rejection of God’s laws for His creation was the reason for their ejection. Every generation since the beginning has had to live and work under the control of the evil one.

We live in the middle of the battle between God and Satan, between good and evil ~ a constant threat to Satan and his kingdom.

“But and if ye suffer for righteousness’ sake, happy are ye: and be not afraid of their terror, neither be troubled.” 1 Peter 3:14

Yet, if we suffer for Christ, we endure, growing closer to Him, knowing more of the joy and fullness of His Spirit ~ thriving as He brings forth His fruit in us.

“The righteous shall flourish like the palm tree:
he shall grow like a cedar in Lebanon.”
Psalm 92:12

“He that trusteth in his riches shall fall;
but the righteous shall flourish as a branch.”
Proverbs 11:28

The Holy Spirit is the inspiration for the writing of God’s Word and the presence and power in His Word for our defense against the evil one. The power of the Holy Spirit in us uses the sword of the Spirit ~ His Holy Word ~ to bring us from striving to surviving and victoriously thriving in Satan’s hostile territory. We do well to meditate on these to know ourselves and our enemy.

In a second part, we will post this storehouse of His Word concerning the difference in God’s people and the world. We will see from these verses who are the righteous and ungodly; those of light and those of darkness, those of truth and deceit, those of life and death, of peace and oppression, of the Spirit and flesh.

It is by the power of His Spirit and His Word that brick and mortar walls fall down as He leads us on victoriously, joyfully, and fruitfully.

Dear Father in heaven, you continue to teach us and lead us onward in the power of the cross. Let your Spirit and Your Word do their work in the hearts and lives of your children throughout this world. Bring those who are striving to the reality of surviving ~ and those who are surviving to thriving so that the world may know that we are your children. In Jesus’ name, I pray. Amen.
Fran

4 thoughts on “Surviving and Thriving in Enemy Territory”