This article “Why Should God Spare America” was patterned after a sermon “Things That God Did Not Spare” preached by a young minister, Andrew Stewart, in Northern Ireland August 7, 2016.  It included the main question: “Why should God spare you?” I strongly urge you to listen to this sermon, for your own personal blessing and hope.

The Angels in Heaven

“God did not spare angels when they sinned, but cast them into hell and committed them to chains of gloomy darkness to be kept until the judgment.” 2 Peter 2:4; Jude 6

In Isaiah 6 we see the angels who veiled their faces, showing reverence and respect, humble before the Creator. But because of pride, in a moment of time, the devil and his angels were cast out of heaven. Ezekiel 28:13

God did not spare them. Why should God spare a nation that lives in pride and gives no respect to His authority and rule over us? Are we better than the angels?

“And God saw the wickedness of the earth” and the evil hearts of men. Genesis 6:5

“He did not spare the ancient world, but preserved Noah, a herald of righteousness, with seven others, when he brought a flood upon the world of the ungodly. 2 Peter 2:5

They had a preacher.

They also had the blessing of God’s patience, of His long-suffering toward a wicked and rebellious world.

God did not spare them. Why should God spare a nation that pays no heed to the word of God, but lives independently of Him? Are we better than the old world?

The Cities of the Plains

He did not spare Sodom and Gomorrah. Genesis 13:10

They knew what it was to enjoy the natural and temporal blessings of God.   They had a godly man in their midst. They had an intercessor. Abraham prayed for God to save them. (Genesis 18:22)

“By turning the cities of Sodom and Gomorrah to ashes he condemned them to extinction, making them an example of what is going to happen to the ungodly;” 2 Peter 2:6

God did not spare them. Why should God spare a nation that openly and defiantly approves and practices the things that are an abomination to Him? Are we better than Sodom and Gomorrah?

He did not spare His chosen people, but many times brought judgment upon them because of their disobedience.

Because of their unbelief, they were left to wander in the wilderness.

They had the blessings of prayer, and of the word from the prophets .

Jerusalem was burned, and the people were taken into exile for seventy years; an equivalence of the number of years that they had profaned the Sabbath.

National Israel in A.D. 70 was scattered to the end of the world.

They had all the privileges. They had God’s blessings, His power, His precepts, the oracles, the types, the shadows of the Messiah, yet they rejected Him when He came.

God did not spare them. Why should God spare a nation that rejects the message of His Son? Are we better than the Israelites?

Why should God spare America? Why are we any different from those who fell under His wrath and judgment? We have the word of God that He has preserved all these years, translated in our language, which men have lived and died for. We have ministers who preach the Word of God; intercessors who pray for the salvation of this country.

In comparison to those whom God did not spare, we stand condemned before Him.   We can but wonder why He has been so patient with us; in mercy and long-suffering with us.

How can God spare us? Where is our hope? The answers are found in His Word.

“He who did not spare his own Son but gave him up for us all, how will he not also with him graciously give us all things?”
Romans 8:32

God did not spare His own Son but He poured out His wrath upon Him so that we may be spared.

As God’s children, we must examine our own hearts and our confession of faith.

“For it is time for judgment to begin at the household of God; and if it begins with us, what will be the outcome for those who do not obey the gospel of God?” 1 Peter 4:17

God’s patience is on our behalf, as His people, that we might be turned to Him. Persecution may be the only means to prove who belongs to Him. It is in these times that we turn to His Word and call out for the Holy Spirit’s power in our own hearts and lives, and proclaim this hope to others.

“Be diligent to be found by him without spot or blemish, and at peace. And count the patience of our Lord as salvation,”
2 Peter 3:15 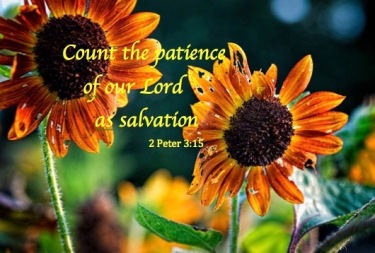 Dear Father,  as we wait and hope, in the mercy and grace of our Lord, whom you did not spare for our sake, let us continue to pray, proclaim your kingdom, and “grow in the grace and knowledge of our Lord and Savior Jesus Christ. To him be the glory both now and to the day of eternity.” In whose name we pray, praise, and thank you. Amen.  2 Peter 3:18
Audio: Things That God Did Not Spare